What Happened To My Frets? 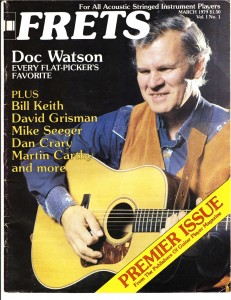 In 1979, I had just finished my first year at college and returned home for a summer break.  Of course, my banjo, guitar and mandolin came back home with me.  After walking into a nearby music store, I discovered the premier issue of a magazine called “Frets”.  This was a perfect magazine for me, I thought, since I played three instruments and wanted to learn as much about playing them as possible. 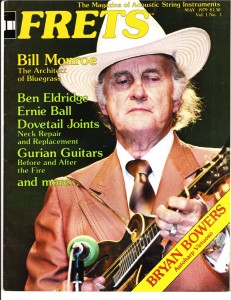 The topics, covered by experts in the field, included such themes as “Song Arrangement”, “Acoustic Music Festivals”, Reading Music”, “Buying Strings”, “Sound Recording”, “Performing”, “Learning and Teaching” and “Playing Tips”. Much of the information is still relevant today, which is one of the reasons I have maintained by collection for all of these years.

There was also a luthier section that covered many topics from instrument repairs to instrument building.  The care and maintenance of your instruments was addressed, as well as reviews of vintage instruments. 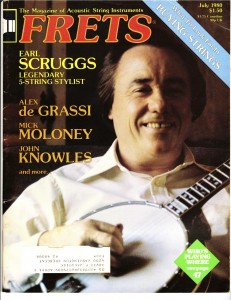 This was an encyclopedia of musical knowledge for the acoustic musician.  It included lessons from well respected instructors Alan Munde, Byron Berline, David Grisman, and Happy Traum.  Upright bass was taught by Ron Carter and of course, Bill Keith wrote many columns on music theory. Other Shop experts, such as Roger Siminoff and James Rickard talked about everything from “Banjo Tone Bars” to “Acoustructure – Instrument Endurance Tests”.  Each month was a treasure trove of information.

So whatever happened to Frets?  You would think that such a fine magazine should have survived and thrived in today’s acoustic music scene.  The new performing artists of today should be the new feature covers and the topics could be further updated from yesterday’s news.  I guess the profit for the publisher was just not there but the interest from its readers still is today, as noted on music forums concerning this topic. 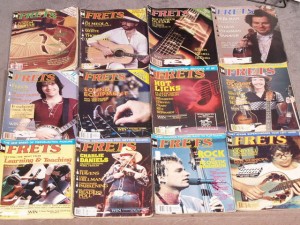 This magazine is loaded with so much useful information, that  I have maintained my copies in my personal library and often refer to them.  While I have an entire collection of the 114 issues that I will never part with, I have placed extra copies up for sale on my website www.fretmentor.com.  Since the magazine is no longer available, each copy is a collector’s item for music students, players, and fans of the monthly featured artist.  You can find a gallery of the copies available at the Fretmentor Store.

So while I wonder what happened to my “Frets”, maybe one day, they’ll bring it back.  In the meantime, I will be thumbing through my issues from 1979 to 1989 and reliving some fond memories of some great players.

Born in Detroit, Michigan, David F. Jakubiak has been involved in music since the age of 7, beginning as a clarinet player and then at 9 turning his attention to stringed instruments. He earned trophies in group talent competitions while a student at the University of Michigan. The instructor earned a BA degree in Organizational Psychology from the University of Michigan and a Masters in Public Administration at the University of Kansas. At college, he also studied classical music and music history. His passion is teaching music and in performing as a musician. In addition to on-stage performances, David has played in various venues from outdoor festivals to small nightclubs. He plays, performs and teaches various styles of music, including rock, pop, blues, jazz, classical, country and bluegrass styles. He performs and teaches acoustic and electric guitar, five-string banjo, and mandolin. His styles range from Scruggs, melodic, Reno and old-time style on banjo, to finger-style and flat-picking technique on guitar, to various styles of mandolin. For over 45 years, Mr. Jakubiak has taught all age groups, taking a personal interest in each student to ensure that they receive the attention and lesson plans that meet their needs and interests. His lessons and instructional materials place a strong emphasis on the practical use or music theory to ensure that the student understands the instrument and learns how to improvise to develop their own style. Mr Jakubiak teaches group and studio classes, webcam lessons over the internet, and individual private lessons to students of various ages. He has compiled and produced eight instructional books on CD as well as numerous instrumental arrangements. David has written for Banjo Newsletter, a monthly publication for the banjo enthusiast and has published an article in Issue #37 of the Fretboard Journal. He is the founder of www.fretmentor.com. To contact David Jakubiak, please feel free to e-mail him at david AT fretmentor.com (substitute the @ sign for the word AT)
View all posts by fretmentor →
This entry was posted in Banjo, Fiddle, Guitar, History, Mandolin, Music Theory, Uncategorized and tagged Acoustic Music Festivals, Al Dimeola, Alan Munde, Albert Lee, Arlo Guthrie, Banjo, banjo lesson, banjo magazine, banjo players, banjo publication, Bela Fleck, Bill Keith, Bill Monroe, bluegrass festival, Buying Strings, Byron Berline, Chet Atkins, Dan Fogelbery, David Grisman, Doc Watson, earl scruggs, F Style Mandolin, frets, frets magazine, fretted instruments, Guitar, guitar lesson, guitar players, Happy Traum, history of performers, Itzhak Perman, Learning and Teaching Music, Los Lobos, luthiers, mandolin lesson, mandolin players, music instruction, music lessons, music pioneers, Music Playing Tips, music teacher, Music Theory, Performing, Ravi Shankar, Reading Music, Ron Carter, Sam Bush, Song Arrangement, Sound Recording, Stephane Grapelli, Willie Nelso. Bookmark the permalink.

3 Responses to What Happened To My Frets?