& A Cruise To The Bahamas

Talk about going to see a concert in style.   On the weekend of May 16-17, 2015, a very special woman in my life and I took a romantic two night cruise to the Bahamas to celebrate my birthday.  An enticing aspect of the cruise was to see Scottish  born singer/songwriter KT Tunstall. 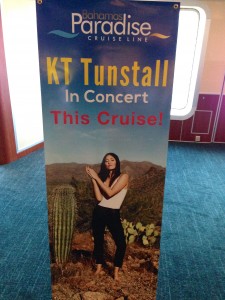 KT has recorded five studio albums and has received multiple Brit Award nominations, including winning the  Best Female Solo Artist and a 2007 Grammy nomination for Best Song “Black Horse and a Cherry Tree”.  This is a great song to not only dance to but also to perform yourself.  Her hit “Suddenly I See” was featured in the motion picture The Devil Wears Prada, which lead to her interest in composing for films, including “The Kid”, “A Winter’s Tale” and the latest “We Could Be Kings” for Disney’s motion picture “Million Dollar Arm”..  For those of you who do not know of KT Tunstall, I highly recommend you check her music out.

So a little about the cruise.  The two night cruise originated from the Port of Palm Beach, in West Palm Beach, Florida.  A friend and I got an early start on Saturday May 16th, wandering the ship, and enjoying the food and drinks.  While having dinner in the dining area, the cruise took off at about 6:30pm.  After dinner, we went to the clubs, a martini bar and the casino.  I danced the night away with my incredible dance partner to both a country rock band, as well as in the disco lounge.  Sunday morning was spent away from the ship in the Bahamas Yucatan Grand resort. We walked the white sandy beaches, laid out at the lap pool overlooking the ocean and toured the Freeport Market Place after lunch.  Upon arriving back at the ship, dinner was followed by the KT Tunstall concert.  Afterward, we danced well into the night, until we arrived back home at 8 am.

Once back from the Bahamas, I made sure we upgraded the general admission tickets to get the best seats possible at the Grand Theatre section of the ship.  We waited in line and sat in the 2nd row. KT Tunstall promptly started at 10 pm.

For those who are not aware of KT Tunstall, she is a master at using effects pedals and especially loops to supplement her rhythmic guitar strums and singing.  The effect is like a drum machine, except she provides background vocals, hand clapping, guitar tapping and even a kazoo to get special effects.  Not only can she sing but her timing, dynamics and rhythmic guitar strums sets her apart from many performers.  She jokingly introduced her band (the effect pedals) as coming from Taiwan. 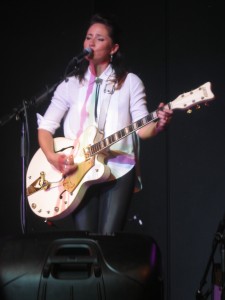 Ever since playing a couple of Tunstall’s tunes, I always planned on seeing her in concert.  In addition to my two favorites (“Black Horse & A Cherry Tree” and “Hold On”), KT performed a number of her songs from her albums “Drastic Fantastic” and “Eye To The Telescope”.  Songs such as “White Bird”, “Other Side of The World”, and “Under The Weather” all were well received.  Yet, KT played a number of cover tunes such as “Don Henley’s “Boys of Summer”, Fleetwood Mac’s “Landslide”, “Walk Like An Egyptian” and ending with an audience favorite Jackson Five “I Want You Back”, with her own signature style rhythmic variation .

KT Tunstall’s show lasted an impressive two hours. Throughout the show, KT Tunstall engaged the audience and telling stories such as the time she was recognized by one of her favorite female vocalists; Fleetwood Mac’s own Stevie Nicks.  She even invited many of the women (and the men who all chose to stay in their seats) to join her on stage to dance during one of her songs.  The show was an intimate and personal experience.  Both the concert and the cruise made this one of my favorite birthday experiences of all time.

PLEASE NOTE:  I will be posting concert photos (WITH A LINK HERE) and maybe some more cruise photos on my website at www.fretmentor.com. and on my Fretmentor Facebook page. So please check back for updates.

Here is a link to a recent podcast of KT Tunstall:

Born in Detroit, Michigan, David F. Jakubiak has been involved in music since the age of 7, beginning as a clarinet player and then at 9 turning his attention to stringed instruments. He earned trophies in group talent competitions while a student at the University of Michigan. The instructor earned a BA degree in Organizational Psychology from the University of Michigan and a Masters in Public Administration at the University of Kansas. At college, he also studied classical music and music history. His passion is teaching music and in performing as a musician. In addition to on-stage performances, David has played in various venues from outdoor festivals to small nightclubs. He plays, performs and teaches various styles of music, including rock, pop, blues, jazz, classical, country and bluegrass styles. He performs and teaches acoustic and electric guitar, five-string banjo, and mandolin. His styles range from Scruggs, melodic, Reno and old-time style on banjo, to finger-style and flat-picking technique on guitar, to various styles of mandolin. For over 45 years, Mr. Jakubiak has taught all age groups, taking a personal interest in each student to ensure that they receive the attention and lesson plans that meet their needs and interests. His lessons and instructional materials place a strong emphasis on the practical use or music theory to ensure that the student understands the instrument and learns how to improvise to develop their own style. Mr Jakubiak teaches group and studio classes, webcam lessons over the internet, and individual private lessons to students of various ages. He has compiled and produced eight instructional books on CD as well as numerous instrumental arrangements. David has written for Banjo Newsletter, a monthly publication for the banjo enthusiast and has published an article in Issue #37 of the Fretboard Journal. He is the founder of www.fretmentor.com. To contact David Jakubiak, please feel free to e-mail him at david AT fretmentor.com (substitute the @ sign for the word AT)
View all posts by fretmentor →
This entry was posted in Concerts & Festivals, News & Events, Uncategorized and tagged KT Tunstall. Bookmark the permalink.