Sierra Hull, Mandolin Virtuoso, Takes Her Trio to the Lyric

Sierra Hull’s Trio Is A Hit 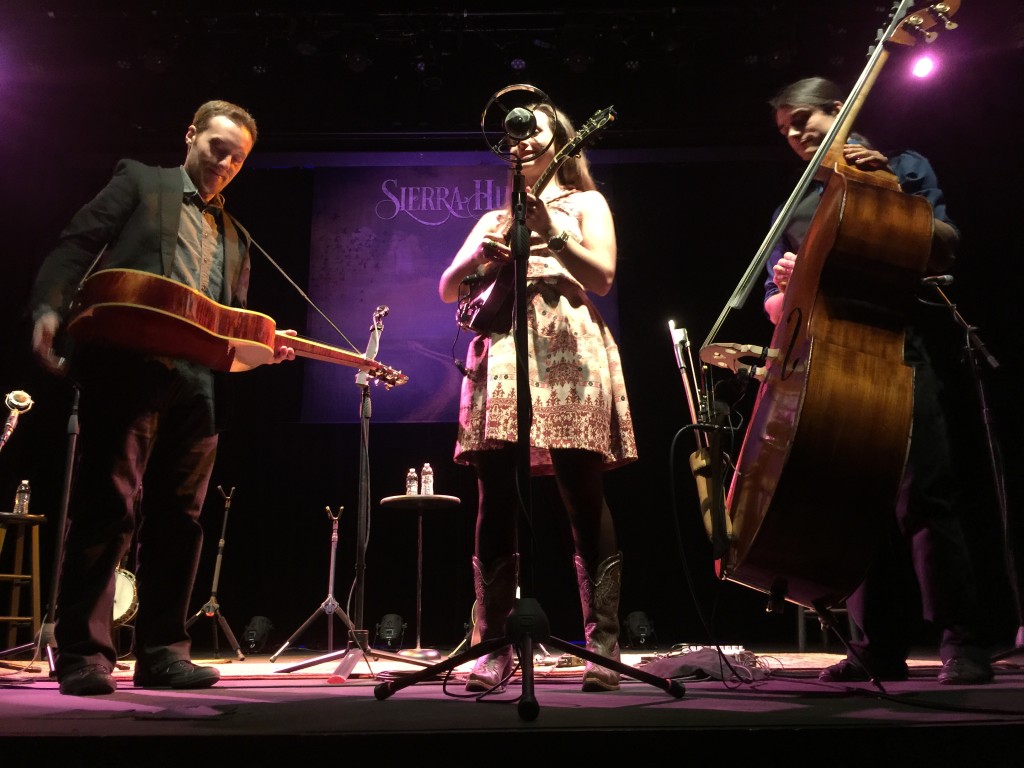 Sierra Hull introduced her newest music project “Weighted Mind” February 11, 2016, at the newly renovated Lyric Theater in Downtown Stuart. She was joined onstage by Ethan Jodziewicz (double bass) and Justin Moses (banjo, dobro and mandolin). Ms. Hull easily lived up to her widespread acclaim as a mandolin virtuoso while her voice was both expressive and soothing. Although it had been five years since her last musical release it was obvious she has been working very diligently continuing to master her craft and expand into the landscape of songwriter and lyricist. While the roots of bluegrass could be found interspersed throughout her presentation it seems her music has moved into another realm where it intersects with a variety of styles. 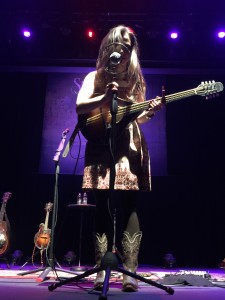 The trio performed most, if not all, of the offerings on Weighted Mind. She told the audience the album had been a couple years in the making and lyrics for several songs referenced the growth pangs associated with travel from teen years to full adulthood, not to mention living up to lofty expectations coming from her early success. It seemed as though the age of twenty-two must have been especially rough for the now twenty-four year old. Both “Stranded” and “The In-Between” describe the turmoil of being twenty-two. Other lyrics also revealed doubts and insecurity (“Compass” and “Lullaby”). Perhaps the most revealing song was her first encore offering which she shared with the audience as being written on a particularly vulnerable evening even though the words were positive and future-looking.

Musically the trio was inspiring and complex. Ms. Hull lived up to her reputation and training on both the mandolin and mandola. Mr. Jodziewicz excelled on the double bass, bowing the strings as much as plucking. Mr. Moses’ banjo style was reminiscent of Allison Brown and he played mandolin toe to toe with Ms. Hull. His dobro work was just as enjoyable. All in all, a wonderful show in a wonderful setting, especially if you were lucky enough to be front and center!

Note:  Our guest Blog writer, Randall Cameron, who critiqued Sierra’s Trio, is a Research Biologist for the USDA, Agricultural Research Service. He  has been “playing” the banjo, for better or worse, a total of about three and a half years interspersed over a much longer period of time

Born in Detroit, Michigan, David F. Jakubiak has been involved in music since the age of 7, beginning as a clarinet player and then at 9 turning his attention to stringed instruments. He earned trophies in group talent competitions while a student at the University of Michigan. The instructor earned a BA degree in Organizational Psychology from the University of Michigan and a Masters in Public Administration at the University of Kansas. At college, he also studied classical music and music history. His passion is teaching music and in performing as a musician. In addition to on-stage performances, David has played in various venues from outdoor festivals to small nightclubs. He plays, performs and teaches various styles of music, including rock, pop, blues, jazz, classical, country and bluegrass styles. He performs and teaches acoustic and electric guitar, five-string banjo, and mandolin. His styles range from Scruggs, melodic, Reno and old-time style on banjo, to finger-style and flat-picking technique on guitar, to various styles of mandolin. For over 45 years, Mr. Jakubiak has taught all age groups, taking a personal interest in each student to ensure that they receive the attention and lesson plans that meet their needs and interests. His lessons and instructional materials place a strong emphasis on the practical use or music theory to ensure that the student understands the instrument and learns how to improvise to develop their own style. Mr Jakubiak teaches group and studio classes, webcam lessons over the internet, and individual private lessons to students of various ages. He has compiled and produced eight instructional books on CD as well as numerous instrumental arrangements. David has written for Banjo Newsletter, a monthly publication for the banjo enthusiast and has published an article in Issue #37 of the Fretboard Journal. He is the founder of www.fretmentor.com. To contact David Jakubiak, please feel free to e-mail him at david AT fretmentor.com (substitute the @ sign for the word AT)
View all posts by fretmentor →
This entry was posted in Concerts & Festivals, Mandolin and tagged Sierra Hull. Bookmark the permalink.

One Response to Sierra Hull, Mandolin Virtuoso, Takes Her Trio to the Lyric