Meeting The King of The Blues

The Night I Met

the King of the Blues

I remember it as though it was yesterday.  On April 2, 1992, an old friend and I attended the BB King concert at the now defunct Carefree Theatre, located in West Palm Beach, Florida.  It was a great concert and I believe his album “Live At The Apollo” was recently released.

After the show, I waited until the audience cleared out and went to the stage.  I asked the set up man if there was a way BB King could sign my program.  I never collected autographs until then, but I was impressed enough with BB King that I wanted to take back a memento.  The man suggested that I go to the side of the building where his bus was parked to see if he was available to sign.

We walked to the bus and I ran into his cousin (the trumpet player) who signed the program.  I was thinking to myself, this just wouldn’t cut it with my friends if I didn’t get BB to sign the program himself.  I asked if BB King could sign it and his cousin said while BB is eating between sets, maybe I should try to come back after the 2nd show.  So, we went home, changed clothes, and returned an hour later.

We patiently waited outside, even though it started to slightly rain. You could hear the last show coming to an end.  When it did, BB King appeared and was escorted into his bus.  He sat at the passenger seat, got a back massage and drank some orange juice.  Approximately 30 people were waiting to greet him. I was one of the lucky ones that night as well.

At 1:30 am in the morning, BB King took the time to greet each and every fan.  When it was my turn to meet him, I shook his hand, chatted with him briefly about his music and told him I am studying his instructional videos.  I even suggested he write a companion instructional book and he said that is a good idea.  I doubt I had any thing to do with it but a book came out later to match his instructional VHS tapes.

From that day, I felt blessed to meet a man as humble as BB King.  Although he was a star at the time, he never forgot his roots, which explains his desire to please the fans that sat in the rain to see him that night. 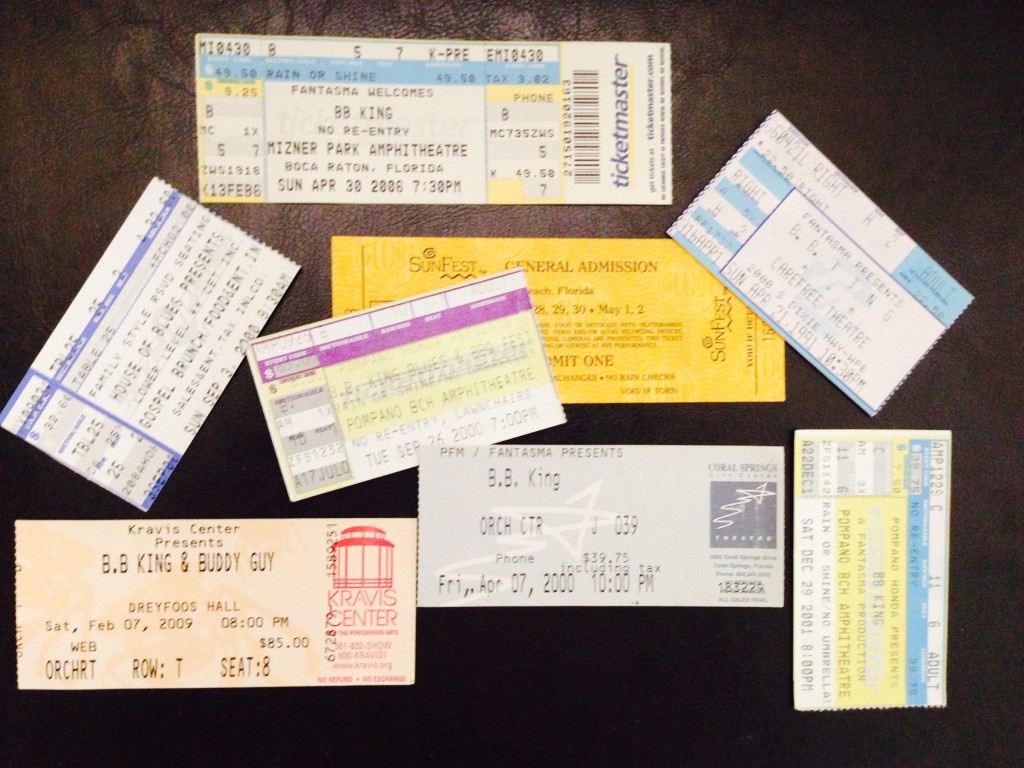 I went and saw him another eight times.  All the concerts provided lasting memories.  Yet, none of them will surpass the night I was able to personally meet the King of the Blues.

Born in Detroit, Michigan, David F. Jakubiak has been involved in music since the age of 7, beginning as a clarinet player and then at 9 turning his attention to stringed instruments. He earned trophies in group talent competitions while a student at the University of Michigan. The instructor earned a BA degree in Organizational Psychology from the University of Michigan and a Masters in Public Administration at the University of Kansas. At college, he also studied classical music and music history. His passion is teaching music and in performing as a musician. In addition to on-stage performances, David has played in various venues from outdoor festivals to small nightclubs. He plays, performs and teaches various styles of music, including rock, pop, blues, jazz, classical, country and bluegrass styles. He performs and teaches acoustic and electric guitar, five-string banjo, and mandolin. His styles range from Scruggs, melodic, Reno and old-time style on banjo, to finger-style and flat-picking technique on guitar, to various styles of mandolin. For over 45 years, Mr. Jakubiak has taught all age groups, taking a personal interest in each student to ensure that they receive the attention and lesson plans that meet their needs and interests. His lessons and instructional materials place a strong emphasis on the practical use or music theory to ensure that the student understands the instrument and learns how to improvise to develop their own style. Mr Jakubiak teaches group and studio classes, webcam lessons over the internet, and individual private lessons to students of various ages. He has compiled and produced eight instructional books on CD as well as numerous instrumental arrangements. David has written for Banjo Newsletter, a monthly publication for the banjo enthusiast and has published an article in Issue #37 of the Fretboard Journal. He is the founder of www.fretmentor.com. To contact David Jakubiak, please feel free to e-mail him at david AT fretmentor.com (substitute the @ sign for the word AT)
View all posts by fretmentor →
This entry was posted in Concerts & Festivals, Guitar, News & Events and tagged BB King, King of the Blues, Lucille. Bookmark the permalink.