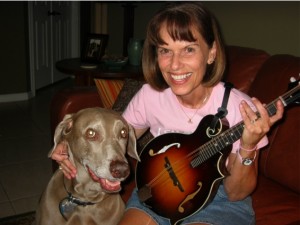 Gretzky With One Of His Favorite Students

On June 26th, 2010, I had the sad misfortune to have to put my best friend to sleep.  Gretzky is my pet weimaraner and my best friend for 11 and 1/2 years.  This past month Gretzky became ill and headed to the music studio in the sky.  So why am I writing about him on my own music website and blog? 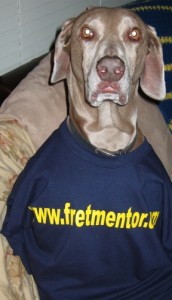 Well, Gretzky was more than just a pet and best friend.  He performed an integral function as part of Fretmentor’s business.  He was Fretmentor’s business partner,  cover model, finance manager and audience.  He modeled the apparel.  He collected and even on some occasions ate the lesson fees.  Gretzky entertained the students.  In addition, he is the cover star featured on Fretmentor’s Children Guitar instructional book on CD and the children would be curious to learn more about him. 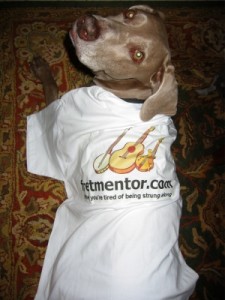 Many of my students became acquainted with Gretzky when they arrived for their lessons. He had many favorite students and knew which day they would arrive with treats. He would wait for their arrival and greet them at the door.  He also let them know when their hour lesson was over.

On at least one occasion, Gretzky grabbed the lesson fees and swallowed a portion of a $20 bill (he disregarded the singles)  If a student wasn’t careful and left their case open, he would steal a guitar, mandolin or banjo polishing cloth.  He came back with it just to show you that he could do it if and when he wanted to.  Yet, he freely returned the rag to its rightful owner.

When I recorded music, I sometimes forgot that Gretzky would walk in just as the recording was finishing.  Upon review, you could hear Gretzky’s collar jingling in between the instrumental breaks. So that so-called perfect recording had to be recorded over. 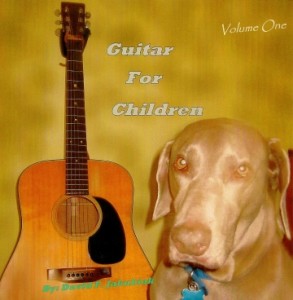 So it was a sad month as we lost a key member of the Fretmentor community.  I will miss my best friend dearly but he will never be forgotten. When it is time for me to leave this earth, I look forward to playing my guitar, banjo, or mandolin once again with Gretzky by my side.

This entry was posted in Fretmentor News, Uncategorized and tagged fretmentor. Bookmark the permalink.