JD Crowe and the New South Perform at the Lyric Theatre 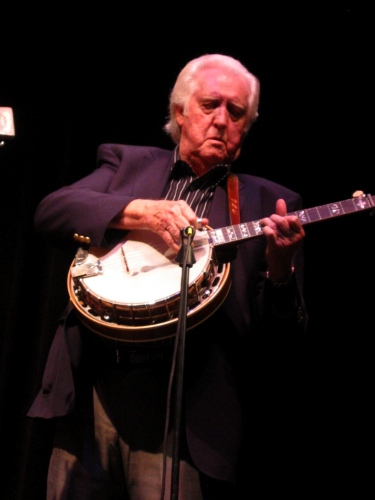 On Saturday, March 20, 2010, I had the pleasure of seeing JD Crowe, one of the greatest banjo players of all time, perform with his band JD Crowe and the New South at the Lyric Theatre in Stuart, Florida.  Prior to attending the show, I researched my archives of earlier Banjo Newsletter (see BNL September 1976 and 1982) cover stories of JD Crowe.  While JD Crowe’s appearance at age 72, has changed from those earlier issues, his music remains as tight and energetic as ever.

You see, when I started playing banjo in 1970, JD Crowe and the New South was one of my favorite bluegrass bands.  Next to Earl Scruggs, JD Crowe is one of the true masters of the five-string banjo who I studied and attempted to emulate in my early years.

After the performance, I had the opportunity to meet back stage with JD Crowe and ask him a few questions.  In particular, I wanted to know how he has managed to maintain a band of bluegrass musicians who are not only outstanding performers but have impeccable vocals.  The sound of JD Crowe and the New South is refreshing similar to some of his earliest work.  Yet, former band members such as Tony Rice, Ricky Skaggs and Jerry Douglas are obviously no longer part of the group.  JD Crowe explained to me that while he gets frustrated losing talented musicians, who have left the band to pursue other musical interests, he carefully maintains contact with potential replacements via phone lists and recommendations he receives from others.  As he stated “You really can’t have a great bluegrass band without excellent vocalists”.  JD Crowe and the New South have both. 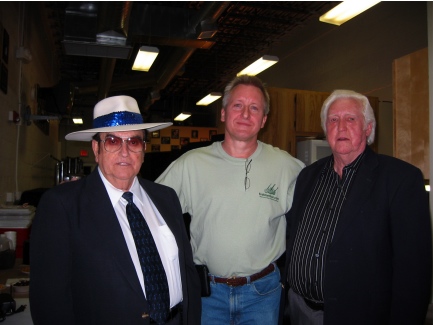 I was surprised to learn that two members of JD’s band, Mark DeSpain on dobro and Cal Perkins on bass have only been with the group since December of 2009.  The entire group has only performed since January 2010 with Dwight McCall and Ricky Watson now being the senior members dating back to 1996 and 1998 respectively.  Yet, with JD Crowe’s eye for talent, this group performed flawlessly and proved to be an audience favorite. 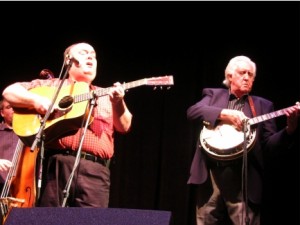 That leaves me with the impression of the master himself.  While performing 50-52 shows a year, JD Crowe hasn’t lost a step.  He still drives a bluegrass band with passion and when you see him playing the five–string banjo on songs like “Fireball”, Scruggs’ “Flint Hill Special” or his own standard “Old Home Place”, you recognize that you have truly seen one of the best in the business.

David Jakubiak has produced six books on CD for banjo, mandolin and guitar.  He has been playing banjo since 1970 and has over 40 years of experience in playing, performing and teaching music.  Check out his site at www.Fretmentor.com

Born in Detroit, Michigan, David F. Jakubiak has been involved in music since the age of 7, beginning as a clarinet player and then at 9 turning his attention to stringed instruments. He earned trophies in group talent competitions while a student at the University of Michigan. The instructor earned a BA degree in Organizational Psychology from the University of Michigan and a Masters in Public Administration at the University of Kansas. At college, he also studied classical music and music history. His passion is teaching music and in performing as a musician. In addition to on-stage performances, David has played in various venues from outdoor festivals to small nightclubs. He plays, performs and teaches various styles of music, including rock, pop, blues, jazz, classical, country and bluegrass styles. He performs and teaches acoustic and electric guitar, five-string banjo, and mandolin. His styles range from Scruggs, melodic, Reno and old-time style on banjo, to finger-style and flat-picking technique on guitar, to various styles of mandolin. For over 45 years, Mr. Jakubiak has taught all age groups, taking a personal interest in each student to ensure that they receive the attention and lesson plans that meet their needs and interests. His lessons and instructional materials place a strong emphasis on the practical use or music theory to ensure that the student understands the instrument and learns how to improvise to develop their own style. Mr Jakubiak teaches group and studio classes, webcam lessons over the internet, and individual private lessons to students of various ages. He has compiled and produced eight instructional books on CD as well as numerous instrumental arrangements. David has written for Banjo Newsletter, a monthly publication for the banjo enthusiast and has published an article in Issue #37 of the Fretboard Journal. He is the founder of www.fretmentor.com. To contact David Jakubiak, please feel free to e-mail him at david AT fretmentor.com (substitute the @ sign for the word AT)
View all posts by fretmentor →
This entry was posted in Banjo, Concerts & Festivals, Mandolin and tagged Bobby Osborne, JD Crowe, JD Crowe and the New South. Bookmark the permalink.

One Response to Bluegrass Legends