A Musical Journey In Phoenix 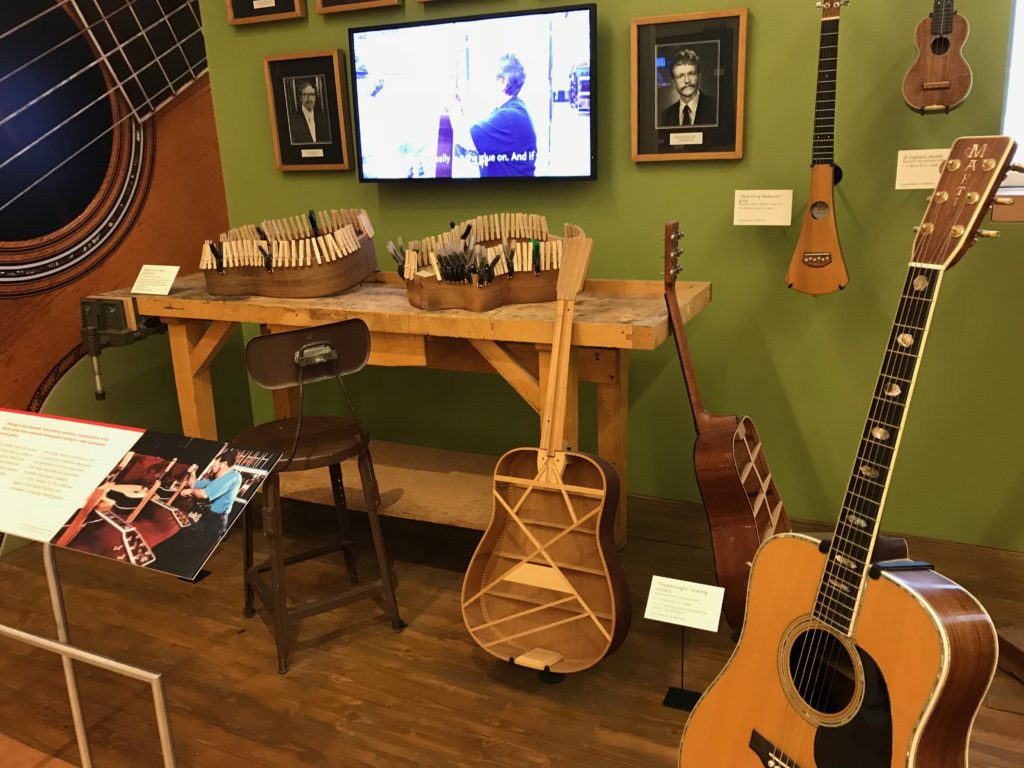 A trip to Arizona for spring training baseball offered my buddy Jim and I the opportunity to visit the Musical Instrument Museum in Phoenix last week. It was our first visit there, but certainly not our last. Located just north of Scottsdale, the museum sits off the freeway in an otherwise isolated area. One is immediately struck by the sheer size of the building itself, much larger than one might think. 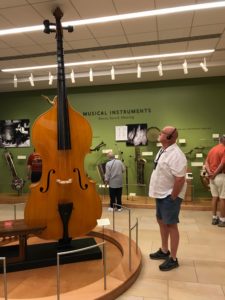 After paying the entry fee (one day for $20, two days for $30), you are given a receiver and set of headphones to access audio samples at various stations throughout the exhibits. The first room we entered on the lower floor centered around the tallest bass I’ve ever seen. My buddy Jim Delfel is not a short man, but he was dwarfed by this towering structure

Moving up to the second floor, the museum groups exhibits geographically in large rooms that flow naturally into the next.

Our time there was limited so we spent the majority of our time in the USA-Canada, Europe and Latin America rooms. If one were to see the entire museum, it is strongly recommended to get the two day pass. You will need it. 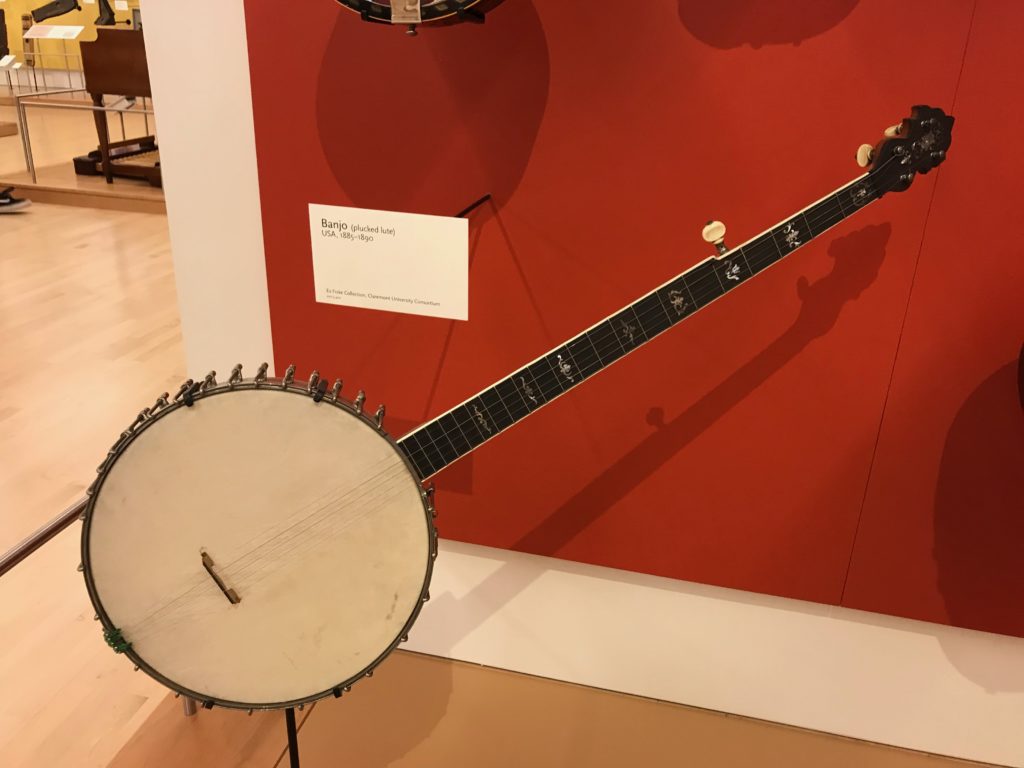 Being a bluegrass banjo player, I had wondered if there would be any banjos. There were many, from the early gourd banjos to the open backs to the resonator banjos commonly used today 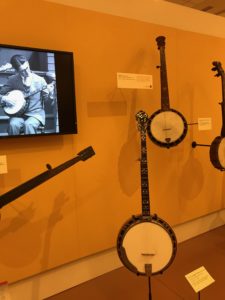 There was even a electric tenor banjo, built in 1938 by Gibson. This banjo was part of a collection loaned to the museum by John Jorgenson. 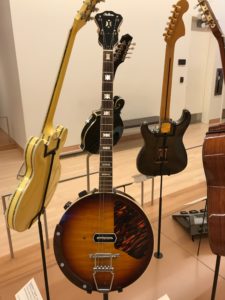 A number of instruments on display were played by well known musicians crossing many genres and time periods. 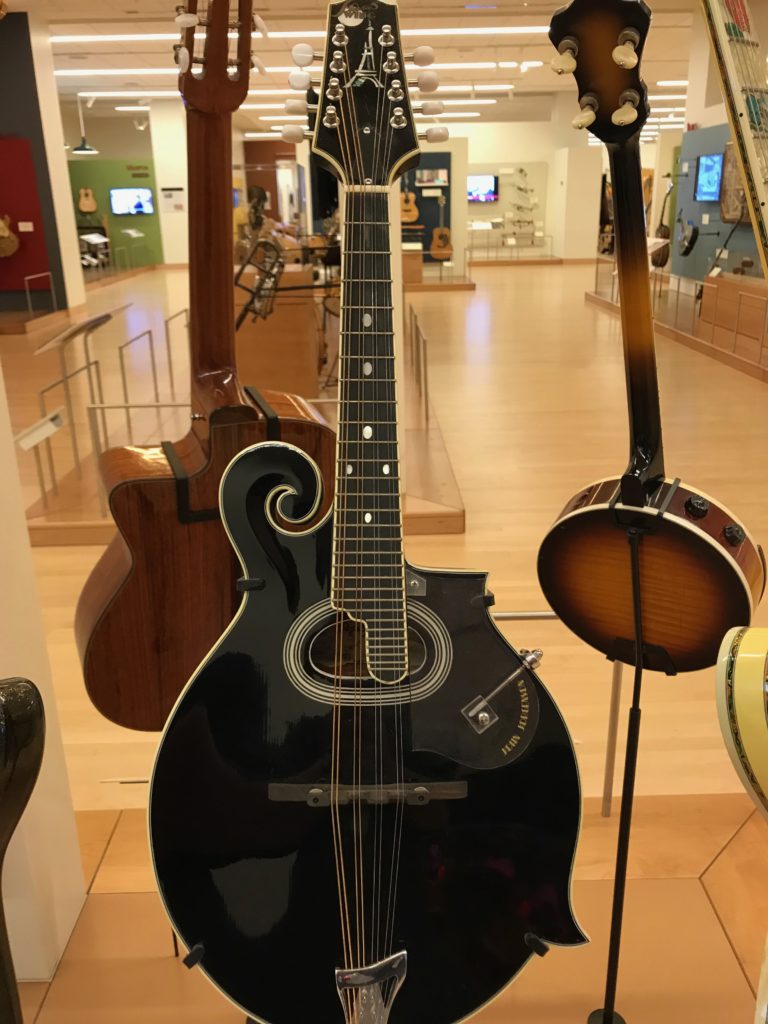 There was Tommy Tedesco’s telecaster, lead guitarist for the Wrecking Crew. Hundreds of recordings that are a part of the music of the 1960s and 1970s came from this guitar. The very drum set that The Who’s Keith Moon detonated on national TV in 1967 on the Smothers Brothers Comedy Hour.   I recalled watching that as a young teen and here was that drum set. 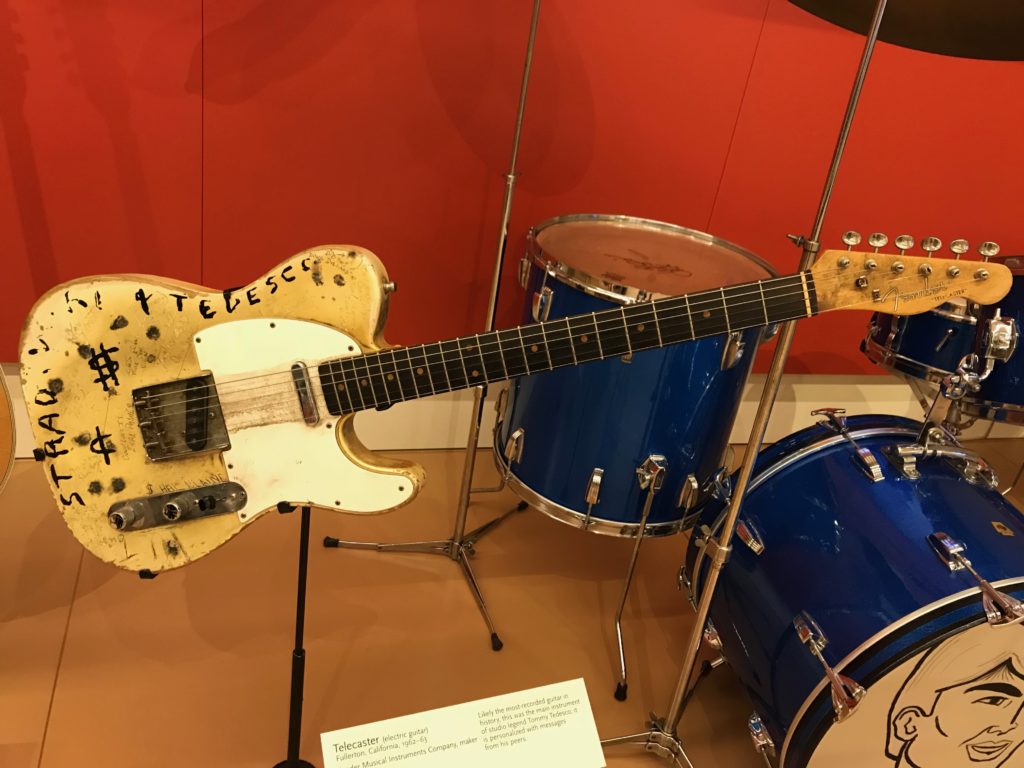 Plenty of other celebrated instruments were on display; Hank Thompson’s and Marty Robbins’ guitars and Nudie suits and a guitar played by the great John McLaughlin 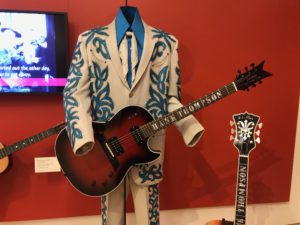 An area devoted to jazz had the clarinets of Benny Goodman and Artie Shaw, as well as the trumpets of Harry James and the great Miles Davis. Herbie Mann’s flute, along with a video of him in concert with it was a treat to both the eyes and ears.

Electronic music was represented in part by a Prophet analog synth donated by Peter Wolf, a mini Moog and a

A fascinating display area created by Martin Guitar Company (see our cover photo), showed guitars in the various stages of construction, along with an explanation video and photos of the members of the Martin family who have overseen this company since the 1800s.

You will notice that I have not yet left the USA-Canada room. This portion of the trip took over two hours, and I have only touched on the highlights. 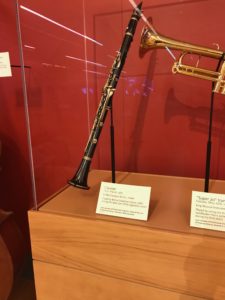 Time was running short so I blasted through the rooms devoted to Europe and Latin America. I never entered the areas for Asia and Africa. But I was resolved to return next time I am in Phoenix.

Any lover of music will find a visit to the Musical Instrument Museum enjoyable. Musicians and instrument builders will find it a must-visit. And if you visit once, you will plan to return. 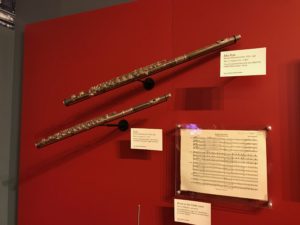 Al Price contributed this article.  Al plays and teaches banjo in Auburn, Washington.  He works by day in sales and marketing for Nechville Banjos and plays banjo for the Rusty Hinges Bluegrass Band.

Born in Detroit, Michigan, David F. Jakubiak has been involved in music since the age of 7, beginning as a clarinet player and then at 9 turning his attention to stringed instruments. He earned trophies in group talent competitions while a student at the University of Michigan. The instructor earned a BA degree in Organizational Psychology from the University of Michigan and a Masters in Public Administration at the University of Kansas. At college, he also studied classical music and music history. His passion is teaching music and in performing as a musician. In addition to on-stage performances, David has played in various venues from outdoor festivals to small nightclubs. He plays, performs and teaches various styles of music, including rock, pop, blues, jazz, classical, country and bluegrass styles. He performs and teaches acoustic and electric guitar, five-string banjo, and mandolin. His styles range from Scruggs, melodic, Reno and old-time style on banjo, to finger-style and flat-picking technique on guitar, to various styles of mandolin. For over 45 years, Mr. Jakubiak has taught all age groups, taking a personal interest in each student to ensure that they receive the attention and lesson plans that meet their needs and interests. His lessons and instructional materials place a strong emphasis on the practical use or music theory to ensure that the student understands the instrument and learns how to improvise to develop their own style. Mr Jakubiak teaches group and studio classes, webcam lessons over the internet, and individual private lessons to students of various ages. He has compiled and produced eight instructional books on CD as well as numerous instrumental arrangements. David has written for Banjo Newsletter, a monthly publication for the banjo enthusiast and has published an article in Issue #37 of the Fretboard Journal. He is the founder of www.fretmentor.com. To contact David Jakubiak, please feel free to e-mail him at david AT fretmentor.com (substitute the @ sign for the word AT)
View all posts by fretmentor →
This entry was posted in Banjo, Guest Columns, Guitar, History, Mandolin, Musical Places of Interest and tagged Martin Guitar, Musical Instrument Museum, Open Back Banjo, Resonator Banjo, Telecaster, Upright Bass. Bookmark the permalink.