Earl & Doug – Gone But Not Forgotten

Within a couple of months, we said goodbye to two of the great banjo players in the world.  Earl Scruggs, the father of three finger picking, and Doug Dillard, one of the great melodic banjo players and an artist who popularized bluegrass as well as country rock music, have passed on.  These two banjo icons provided a childhood of memories for me as well as others.

It is hard to dispute the legendary status of Earl Scruggs.  It can be argued that no one musician has had more of an individual impact on how an instrument would be played or on the banjoists who have since played it.  Born January 6, 1924 in Flint Hill, North Carolina, Earl would become the father of three finger picking style bluegrass banjo.  While other three finger players existed prior to Earl, no one has come close to mastering his style.  There is not enough space to write about the accomplishments of Earl Scruggs.  On March 28, 2012, every banjo player must have had a tear in their eye when they heard of Earl’s passing.  He influenced many and his music will provide a life time of memories. 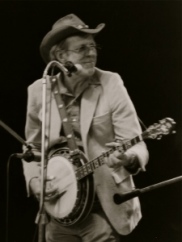 Doug Dillard Performing on Stage in 1984

To those not as familiar with banjo players, Doug Dillard may not be as recognizable as the great Earl Scruggs but he too was a great artist.  Born March 6, 1937 in Salem, Missouri, Doug Dillard was a truly gifted banjo player.    He and his brother Rodney settled in Los Angeles and was signed with Elektra Records, a folk-rock label, with their debut album entitled “Back Porch Bluegrass”.  They were an opening act for the Byrds (a band that Doug later would join as part of their European tour) and departed from strict bluegrass traditions by electrifying their instruments. Doug died on May 16, 2012.

Every banjo player includes a Flatt and Scruggs tune as part of their set list.  It is as if every banjo player owes Earl the respect of playing his music.  A banjo player knows that they will never be able to play the tune the way Earl played it, yet they give it their best effort.  As for Doug Dillard, one of my favorite songs I play on the banjo is “Doug’s Tune” and it is a regular part of my repertoire.  I still have an album of Doug Dillard with the late great John Hartford.  The album was entitled “Dillard Hartford Dillard” and I wore the grooves off it.

Both Earl and Doug had something in common.  They both brought the sound of the banjo to the masses in their television and video appearances.  Hardly anyone fails to recognize the Theme to the Beverly Hillbillies, the popular TV show of the 60s and 70s.  Earl brought the banjo to both the TV and the movie screen.  If you ever watched the movie Bonnie & Clyde, you will remember the car chase scenes with Earl’s Foggy Mountain Breakdown playing in the background.  Also, childhood memories are restored to many who will recognize Doug Dillard as the banjo player of the Darlings on the Andy Griffith Show.

Please feel free to share your memories and experiences with these two gifted artists by posting below.  Earl and Doug may be gone but the gift of music they left will be treasured for many years to come.  Goodbye Earl and Doug.  We’ll miss you.

Born in Detroit, Michigan, David F. Jakubiak has been involved in music since the age of 7, beginning as a clarinet player and then at 9 turning his attention to stringed instruments. He earned trophies in group talent competitions while a student at the University of Michigan. The instructor earned a BA degree in Organizational Psychology from the University of Michigan and a Masters in Public Administration at the University of Kansas. At college, he also studied classical music and music history. His passion is teaching music and in performing as a musician. In addition to on-stage performances, David has played in various venues from outdoor festivals to small nightclubs. He plays, performs and teaches various styles of music, including rock, pop, blues, jazz, classical, country and bluegrass styles. He performs and teaches acoustic and electric guitar, five-string banjo, and mandolin. His styles range from Scruggs, melodic, Reno and old-time style on banjo, to finger-style and flat-picking technique on guitar, to various styles of mandolin. For over 45 years, Mr. Jakubiak has taught all age groups, taking a personal interest in each student to ensure that they receive the attention and lesson plans that meet their needs and interests. His lessons and instructional materials place a strong emphasis on the practical use or music theory to ensure that the student understands the instrument and learns how to improvise to develop their own style. Mr Jakubiak teaches group and studio classes, webcam lessons over the internet, and individual private lessons to students of various ages. He has compiled and produced eight instructional books on CD as well as numerous instrumental arrangements. David has written for Banjo Newsletter, a monthly publication for the banjo enthusiast and has published an article in Issue #37 of the Fretboard Journal. He is the founder of www.fretmentor.com. To contact David Jakubiak, please feel free to e-mail him at david AT fretmentor.com (substitute the @ sign for the word AT)
View all posts by fretmentor →
This entry was posted in Banjo, History and tagged Doug Dillard, Doug's Tune, earl scruggs, foggy mountain breakdown, John Hartford, Them to the Beverly Hillbillies. Bookmark the permalink.

2 Responses to Earl & Doug – Gone But Not Forgotten