Keb Mo – A Night of Blues 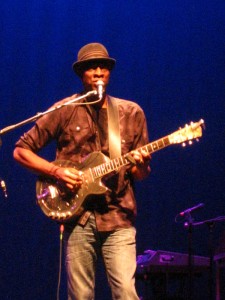 Some recording artists know how to give you your money’s worth.  I think it cliche’ to say that the concert I just attended was the best I have ever seen.  After all, I have seen quite a few and you always seem to like the latest.  With that being said, on February 2nd, 2012, I did get my moneys worth from Keb Mo.  He performed continuously for a good two hours or so at the Lyric Theatre, in Stuart, Florida.

Keb Mo, the artist formerly known as Kevin Moore, is a three-time Grammy Award winner. He is a singer, songwriter and blues guitarist but his style reaches a variety of genres from soul, jazz, pop and rhythm and blues.  Whether or not he is playing his National resonator guitar, picking a Gibson acoustic guitar, or playing his Red Custom Stratocaster, his style is both diverse and unique.

On this particular evening, Keb played an excellent mixture of tunes from his repertoire, which stretches from 1994 and his debut album “Keb Mo”.  Although its hard to pick the best of his selections on this particular night, some of my favorites included the songs “Shave Yo’ Legs”, “Government Cheese”, “Perpetual Blues Machine”, “Am I Wrong”, and “Gimme Watch Got”. Yet, I especially enjoyed his entire band taking turns singing “The Door”.

I would have loved to meet Keb after the show.  We tried but the body guards closed the door on this idea.  Some patrons got through but they had a special pass.  Maybe next time Keb.  You can see my gallery of photos of Keb and his band at www.fretmentor.com. or on Fretmentor’s mobile app for the iPad and iPhone.

Born in Detroit, Michigan, David F. Jakubiak has been involved in music since the age of 7, beginning as a clarinet player and then at 9 turning his attention to stringed instruments. He earned trophies in group talent competitions while a student at the University of Michigan. The instructor earned a BA degree in Organizational Psychology from the University of Michigan and a Masters in Public Administration at the University of Kansas. At college, he also studied classical music and music history. His passion is teaching music and in performing as a musician. In addition to on-stage performances, David has played in various venues from outdoor festivals to small nightclubs. He plays, performs and teaches various styles of music, including rock, pop, blues, jazz, classical, country and bluegrass styles. He performs and teaches acoustic and electric guitar, five-string banjo, and mandolin. His styles range from Scruggs, melodic, Reno and old-time style on banjo, to finger-style and flat-picking technique on guitar, to various styles of mandolin. For over 45 years, Mr. Jakubiak has taught all age groups, taking a personal interest in each student to ensure that they receive the attention and lesson plans that meet their needs and interests. His lessons and instructional materials place a strong emphasis on the practical use or music theory to ensure that the student understands the instrument and learns how to improvise to develop their own style. Mr Jakubiak teaches group and studio classes, webcam lessons over the internet, and individual private lessons to students of various ages. He has compiled and produced eight instructional books on CD as well as numerous instrumental arrangements. David has written for Banjo Newsletter, a monthly publication for the banjo enthusiast and has published an article in Issue #37 of the Fretboard Journal. He is the founder of www.fretmentor.com. To contact David Jakubiak, please feel free to e-mail him at david AT fretmentor.com (substitute the @ sign for the word AT)
View all posts by fretmentor →
This entry was posted in Concerts & Festivals, Guitar, News & Events and tagged blues guitarists, keb mo, resonator guitar, stratocaster. Bookmark the permalink.

3 Responses to Keb Mo – A Night of Blues