BB King Has Earned His Crown

It was back on April 2, 1992, when I first had the great pleasure to see BB King perform live, as well as meet the great blues legend.  Looking back, I should have attended his concerts much sooner than I did. Subsequently, I made it a point to never miss a show when he toured in the South Florida area. I have seen him perform approximately 10-12 times.  However, I will never forget that first show and the impression he made on me. 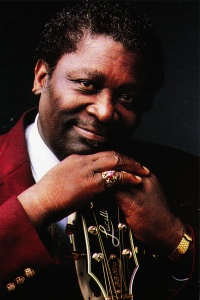 After the first performance, I waited until the crowd dissipated and went to the stage to talk with a member of his stage crew.  I asked if I could get BB to autograph my program. Prior to this concert, I never thought of getting an autograph from a celebrity.  The crew member suggested I go around to the side of the building where BB King’s bus was located. Maybe I would finally have the chance to meet him.  My date and I rushed to the side of the building and greeted BB’s lead trumpet player.  He happily signed the program.  While that was generous, it would be difficult to go home without BB King’s autograph at this point.  So, we were advised to try again after the 2nd show.

The 2nd show ended approximately at 1:00 am.  We had returned to the bus and waited in the drizzling rain for a chance to meet this great blues legend.  There were about 30 die hard BB King fans anxiously waiting to meet him as well.  Despite giving over 300 performances a year and having endured two shows in one night, BB King did, in fact, meet everyone lined up to see him.  For me, it was a thrill and an honor to say hello and shake his hand.  His kind act, demonstrated how BB King has never forgotten his true roots or his fans.

This past year, at the latest show in West Palm Beach in which Buddy Guy also performed, I heard some people say that BB King talked a little too much and didn’t play enough.  My response would be that BB King has paid his dues and earned the right to share with his audience, the stories of what made him the player and person he is today  I look forward to going to his concert and listening to his stories.  After all, I can hear all the songs on his CDs at home.  At age 84, BB king has also earned his crown.  If you never have seen him perform live, you should.

Author’s note:  If anyone can relate other personal stories about meeting or seeing BB King, I would welcome seeing your comments to this post.  Also, If you would like to learn a little more about BB King and other great blues guitarists, you can take my history tour at www.fretmentor.com.

Born in Detroit, Michigan, David F. Jakubiak has been involved in music since the age of 7, beginning as a clarinet player and then at 9 turning his attention to stringed instruments. He earned trophies in group talent competitions while a student at the University of Michigan. The instructor earned a BA degree in Organizational Psychology from the University of Michigan and a Masters in Public Administration at the University of Kansas. At college, he also studied classical music and music history. His passion is teaching music and in performing as a musician. In addition to on-stage performances, David has played in various venues from outdoor festivals to small nightclubs. He plays, performs and teaches various styles of music, including rock, pop, blues, jazz, classical, country and bluegrass styles. He performs and teaches acoustic and electric guitar, five-string banjo, and mandolin. His styles range from Scruggs, melodic, Reno and old-time style on banjo, to finger-style and flat-picking technique on guitar, to various styles of mandolin. For over 45 years, Mr. Jakubiak has taught all age groups, taking a personal interest in each student to ensure that they receive the attention and lesson plans that meet their needs and interests. His lessons and instructional materials place a strong emphasis on the practical use or music theory to ensure that the student understands the instrument and learns how to improvise to develop their own style. Mr Jakubiak teaches group and studio classes, webcam lessons over the internet, and individual private lessons to students of various ages. He has compiled and produced eight instructional books on CD as well as numerous instrumental arrangements. David has written for Banjo Newsletter, a monthly publication for the banjo enthusiast and has published an article in Issue #37 of the Fretboard Journal. He is the founder of www.fretmentor.com. To contact David Jakubiak, please feel free to e-mail him at david AT fretmentor.com (substitute the @ sign for the word AT)
View all posts by fretmentor →
This entry was posted in Concerts & Festivals, Guitar and tagged BB King, blues guitar legends. Bookmark the permalink.

10 Responses to BB King Has Earned His Crown