Slowhand Still Up To Speed 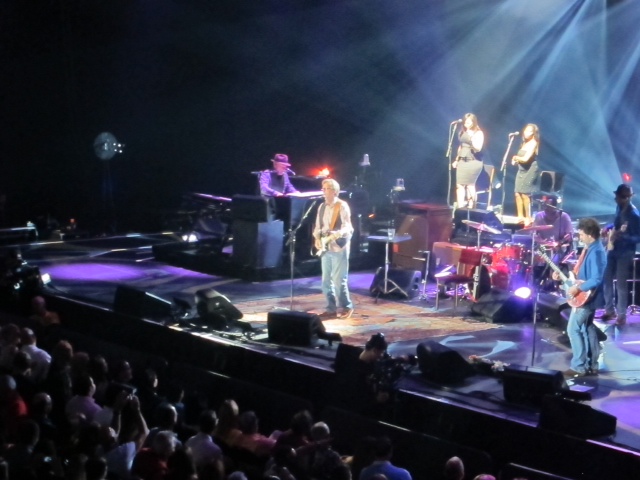 The latest feature for Fretmentor’s Blog is to hear about the experience of other music lovers, students and performers .  Today,  I have invited a guest (Andy Baumann) to contribute his review of the Eric Clapton concert he attended recently.  At Fretmentor’s Blog, I look forward to other contributions and musical articles of interest.  Please contact me to see how you can contribute such articles

“50 Years Further Down The Road” Tour

Slowhand celebrated his 68th birthday on Saturday March, 30, 2013, before a sold-out crowd at the Seminole Hard Rock Live.  This was the second of two shows at the Hard Rock, and the venue was great, featuring really good acoustics and more than two hours of Eric Clapton doing what he does best.  Honestly, he hasn’t lost a step.  The show featured classic Cream and Derek and the Dominos tunes, some of Clapton’s own staples, some really great covers (including an outstanding cover of the Squeeze’s “Tempted” and finished with a heavy dose of awe-inspiring blues guitar.

The heart of the set really came after a blistering version of “Badge” when the band shifted gears to a series of acoustic favorites played in the “unplugged” style of the early 90’s including “Lay Down Sally” and “Layla” as well as the classics “Tears in Heaven” and “Wonderful Tonight.”

The show then turned to serious blues guitar, capped by Clapton’s cover of “Cocaine.”

“Sunshine of My Love” anchored the Encore and the show concluded with the Joe Cocker tune “High Time We Went.”  I would have liked to hear “After Midnight”, but we can’t have everything!

Clapton has stated publicly that he will stop touring at age 70 – so with only two years to go, this was probably my last chance to catch him (it’s been almost 15 years since the last time I saw him live.  However, I’m hoping for some kind of “Out of Retirement” Tour or something along those lines.  With any luck, after 50 years, there’s may still a little more road left for him  Happy birthday Slowhand – you haven’t lost a step!

Andy Baumann is a local attorney in West Palm Beach and avid music lover.  Andy started learning the acoustic guitar about 4 years ago and has since branched out into electric guitar as well.  U2, Guns and Roses, Eric Clapton, the Eagles and the Rolling Stones are his favorite groups.

Born in Detroit, Michigan, David F. Jakubiak has been involved in music since the age of 7, beginning as a clarinet player and then at 9 turning his attention to stringed instruments. He earned trophies in group talent competitions while a student at the University of Michigan. The instructor earned a BA degree in Organizational Psychology from the University of Michigan and a Masters in Public Administration at the University of Kansas. At college, he also studied classical music and music history. His passion is teaching music and in performing as a musician. In addition to on-stage performances, David has played in various venues from outdoor festivals to small nightclubs. He plays, performs and teaches various styles of music, including rock, pop, blues, jazz, classical, country and bluegrass styles. He performs and teaches acoustic and electric guitar, five-string banjo, and mandolin. His styles range from Scruggs, melodic, Reno and old-time style on banjo, to finger-style and flat-picking technique on guitar, to various styles of mandolin. For over 45 years, Mr. Jakubiak has taught all age groups, taking a personal interest in each student to ensure that they receive the attention and lesson plans that meet their needs and interests. His lessons and instructional materials place a strong emphasis on the practical use or music theory to ensure that the student understands the instrument and learns how to improvise to develop their own style. Mr Jakubiak teaches group and studio classes, webcam lessons over the internet, and individual private lessons to students of various ages. He has compiled and produced eight instructional books on CD as well as numerous instrumental arrangements. David has written for Banjo Newsletter, a monthly publication for the banjo enthusiast and has published an article in Issue #37 of the Fretboard Journal. He is the founder of www.fretmentor.com. To contact David Jakubiak, please feel free to e-mail him at david AT fretmentor.com (substitute the @ sign for the word AT)
View all posts by fretmentor →
This entry was posted in Concerts & Festivals, Guest Columns, Guitar and tagged Blues, Cream, Derek and the Dominoes, Eric Clapton. Bookmark the permalink.