If your talking about getting your money’s worth, the show I saw last night speaks volumes.  Alison Krauss and Union Station performed on August 20, 2011 at the Broward Center for the Performing Arts in Ft. Lauderdale, Florida.  While they have been performing together as Union Station for 20 years, this was my first opportunity to see them at a live performance.  They had played years ago at the Pompano Beach Ampitheatre but I must have been sleeping at the wheel and missed it.  Not this time though. 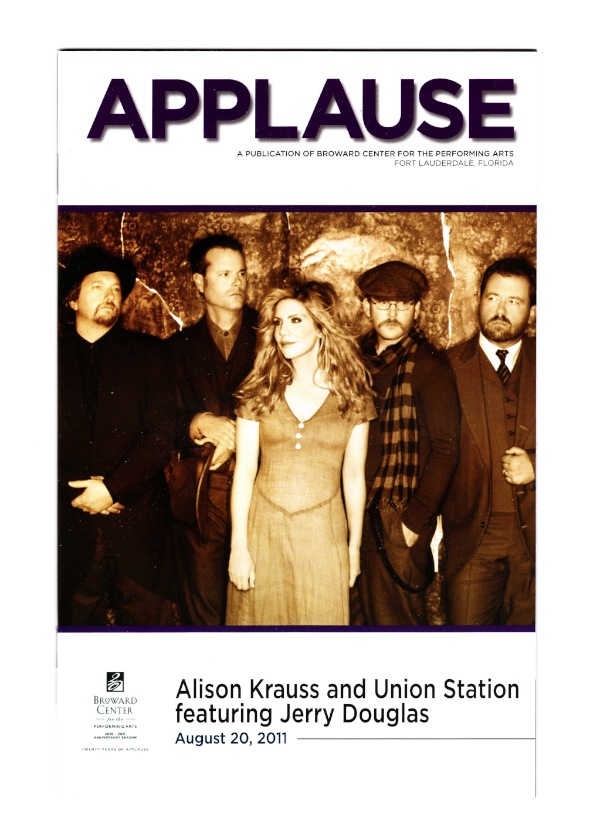 What can you say about this concert?  It had everything.  group performance, duets, acapella, solos featuring each artist, instrumentals, up tempo bluegrass, slow ballads.  Alison Krauss and Union Station performed it all and did so, for two hours. The crowd was entertained

We missed the opening act, as our group had formed a consensus that eating some specialty burgers at Rok:Brgr was worth our time.  It was a good decision.  Yet, I heard one or two songs of the opening act and they weren’t bad.

Alison Krauss continues to produce music that appeals to audiences of all ages.  She has followed up “Raising Sand”, her album with Robert Plant (a 6 Grammy Award winner) with “Paper Airplane”, an album that is taking off with more potential awards awaiting her.  She is a queen of Grammy Award winners, with 26 total.  Her success continues with Alison Krauss and Union Station; her band of 20 years.

Dan Tyminksi – Guitar, mandolin and vocalist for Alison Krauss & Union Station since 1994.  He has been named “male vocalist of the year” four times by the International Bluegrass Music Association.

Ron Block – Banjo, guitar and vocals for Alison Krauss and Union Station since 1991.  Has written 10 songs for AKUS, of which one “A Living Prayer” received Gospel Music Association Dove Award for bluegrass song of the year in 2006.

Jerry Douglas – Has played with AKUS since 1998.  Is a world re-known Dobro Player who has earned 12 grammy awards, 3 CMA awards and numerous IBMA awards.  He is the King of the Dobro guitar.

Barry Bales – Bass and harmony vocal with AKIS since 1990.  He has 13 Grammy Awards to his credit, one CMA award, one Academy of Country Music Award, and 11 IBMA awards, including Bass Player of the Year in 2008.

To say that this band is tight and plays as a group is an understatement.  The 20 years of performing together is evident.  They blend their talents effectively together and compliment one another with harmonies and instrumental technique that far surpasses many groups.  With so many awards to their credit, Alison Krauss and Union Station seem to put any potential individualistic egos aside for the group as a whole.  The band simply works well together.

Alison’s live voice this night was as angelic sounding, with a perfect pitch as what you would hear on any mastered CD recording.  Dan Tyminski’s voice, with his pure Appalachian sound, commanded the audience’s attention.  To further compliment those vocals were the tight and hard driving instrumentals and rhythm technique and harmonies of Jerry Douglas, Ron Block and Barry Bales.

Close to 30 songs performed over two hours, with a solo feature that demonstrated the legendary talent of Jerry Douglas, left the audience with a good feeling at the end of the night.  Alison Krauss interacted well with the audience demonstrating a confident performer with a sense of humor, as she talked about her visit to Florida and even their favorite cereal brands.  While my seats were tucked away far in the second floor Mezzanine  of a large auditorium, I have to say that this time I left the concert feeling even closer to Alison Krauss and Union Station.

Paper Airplane, Dust Bowl Children, Choctaw Hayride, Daylight, Sinking Stone, Let Me Touch You For Awhile, Ghost In The House, Baby Now That I Found You, Rain Please Go Away, Sawing On The Strings, Wild Bill Jones, Every Time You Say Goodbye, Jerry Douglas – Medley of Shenandoah, Spain & Wabash Cannonball), (Dan Tyminski’s Banjo Solo – Green Pastures), The Boy Who Wouldn’t Hoe Corn, Dimming of the Day, Ron Block Featured Eternity, Stay, Bonita and Bill Butler, Miles To Go, Man of Constant Sorrow, Piano Blues – Any Old Time with a transition to Oh Atlanta, (Encore) – Nothing at All, Whiskey Lullaby, Down In the River to Pray, Lie Awake, Your Long Journey, There is a Reason.

Please Add Your Comments Below About Alison Krause & Union Station

Born in Detroit, Michigan, David F. Jakubiak has been involved in music since the age of 7, beginning as a clarinet player and then at 9 turning his attention to stringed instruments. He earned trophies in group talent competitions while a student at the University of Michigan. The instructor earned a BA degree in Organizational Psychology from the University of Michigan and a Masters in Public Administration at the University of Kansas. At college, he also studied classical music and music history. His passion is teaching music and in performing as a musician. In addition to on-stage performances, David has played in various venues from outdoor festivals to small nightclubs. He plays, performs and teaches various styles of music, including rock, pop, blues, jazz, classical, country and bluegrass styles. He performs and teaches acoustic and electric guitar, five-string banjo, and mandolin. His styles range from Scruggs, melodic, Reno and old-time style on banjo, to finger-style and flat-picking technique on guitar, to various styles of mandolin. For over 45 years, Mr. Jakubiak has taught all age groups, taking a personal interest in each student to ensure that they receive the attention and lesson plans that meet their needs and interests. His lessons and instructional materials place a strong emphasis on the practical use or music theory to ensure that the student understands the instrument and learns how to improvise to develop their own style. Mr Jakubiak teaches group and studio classes, webcam lessons over the internet, and individual private lessons to students of various ages. He has compiled and produced eight instructional books on CD as well as numerous instrumental arrangements. David has written for Banjo Newsletter, a monthly publication for the banjo enthusiast and has published an article in Issue #37 of the Fretboard Journal. He is the founder of www.fretmentor.com. To contact David Jakubiak, please feel free to e-mail him at david AT fretmentor.com (substitute the @ sign for the word AT)
View all posts by fretmentor →
This entry was posted in Banjo, Fiddle, Guitar, Mandolin, News & Events, Uncategorized and tagged alison krause, alison krause and union station, barry bales, dan tyminski, jerry douglas, robert plant, ron block. Bookmark the permalink.